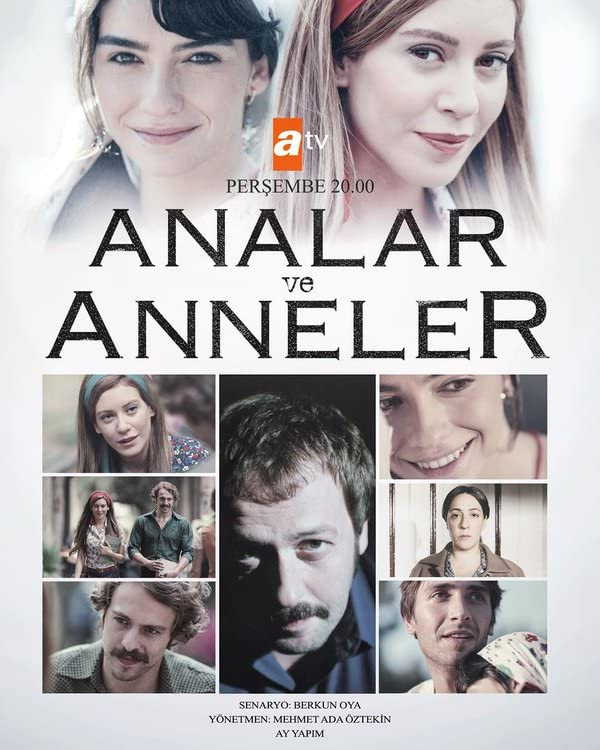 Analar ve Anneler (English title: Mothers and mothers) is a television series whose first episode was aired on October 22, 2015. Ay Yapım is theproducer of the series broadcast on the ATV channel. leading roles of the series directedby Mehmet Ada Öztekin are Sinem Kobal , Hazar Ergüçlü , Okan Yalabık and Binnur Kaya . The series, which takes place in the early 1970s, depicts the events that occurred as a result of the intersection of the lives of Kader, who lives in a small village in Anatolia, and Zeliha, a married young woman studying at a university in Istanbul.  removed from the air in its 9th episode on Thursday, December 24, 2015 due to low ratings.

This Turkish drama takes place during 1970s and tells the story of two different women from different background.

Zeliha (Sinem Kobal) is a beautiful university student whose passionate relationship with the activist Murat (Hakan Kurtas) puts her in danger. She gets married to Murat without her father’s consent and starts to get involved in political fights between right-wing (ultra-nationalist groups) and left-wing opposition.

One day, there occurs a political fight at the university and one student from a right-wing is killed. Both Zeliha and her husband Murat are wanted by the police and for this reason; they start to hide in the house of Murat’s mother, Neriman (Binnur Kaya).

Neriman (Binnur Kaya) is a widow who works at the hospital as a nurse. She accuses Zeliha for letting her son be involved in political fights. When her son and her daughter-in-law come to her house for backing, she calls her brother Ayhan (Okan Yalabik) who is a police officer in Istanbul. Ayhan, in fact, secretly loves Zeliha and wants to separate her from his nephew. He has some physiological problems and kills her nephew Murat in the middle of the night while Murat is planning to escape to abroad. Nobody learns the fact that Ayhan has killed Murat.

Upon learning Murat’s death, both Zeliha and her mother-in-law Neriman find themselves in a desperate situation. However, Zeliha cannot stay at the hospital longer and escapes before the police arrive. During this journey, Zeliha gets great assistance from her classmate Tahsin (Metin Akdulger) who sacrifices his life for the sake of Zeliha.

On the other hand, Kader (Hazar Erguclu) is a beautiful and naïve girl who lives in a small village. After her parents’ death, she starts to live together with her sick aunt in a small house and sometimes, work in the field to get daily wage.

Kader has been in love with Mustafa (Ulas Tuna Astepe) who is the son of the village headman. Kader and Mustafa plans to get married soon and realize their dream of having a happy life together. Mustafa decides to talk with his father Salih Agha (Burak Tamdogan) and expresses his feelings towards Kader. However, Salih Agha objects to this marriage because he has an intention to make Kader as his second wife.

When Mustafa cannot get his father’s consent for the marriage, he decides to get married to Kader secretly. Mustafa and Kader plan to escape from the village together and get married in the city. However, just before their escape, Kader is raped by her prospective father-in-law, Salih Agha, the headman of the village.

In a desperate situation, Kader leaves everything behind and escapes from the village without saying anything to her lover. She wants to protect the pride of Mustafa and does not want him to become the killer of his own father.

Zeliha and Kader give birth at the same hospital where Neriman works. Kader’s baby is born dead whereas Zeliha gives birth to a healthy boy. However, Neriman changes the babies because she does not want to live far away from her grandson that is the only thing left behind by her beloved son. She wants to raise the baby by herself and does not want to let him go just like her son. For this reason, she tells Zeliha that her baby is dead and lets her go to Sweden. At the same time, she persuades Kader that her daughter-in-law has left her baby inconsiderately and wants her to become the wet nurse for her grandson.

The war over a little baby starts between Zeliha and Kader. Zeliha never believes that her baby has died and at the last moment, decides not to go to Sweden. She stays in Istanbul and starts to search for her baby together with Tahsin. Kader, on the other hand, becomes the wet nurse for the baby and puts him in place of her dead baby.

In moms and mothers (analar ve anneler) tv series story, you will explore the story of two different young women whose lives become unexpectedly intertwined. Will Zeliha learn that her son is still living? Will Tahsin and Zeliha eventually become happy? Will Mustafa learn why his lover Kader has left the village without saying anything? Will Zeliha manage to get his son back from Kader? What will happen to Ayhan when he learns that Zeliha falls in love with Tahsin? Will Tahsin disclose that he comes from a wealthy family?