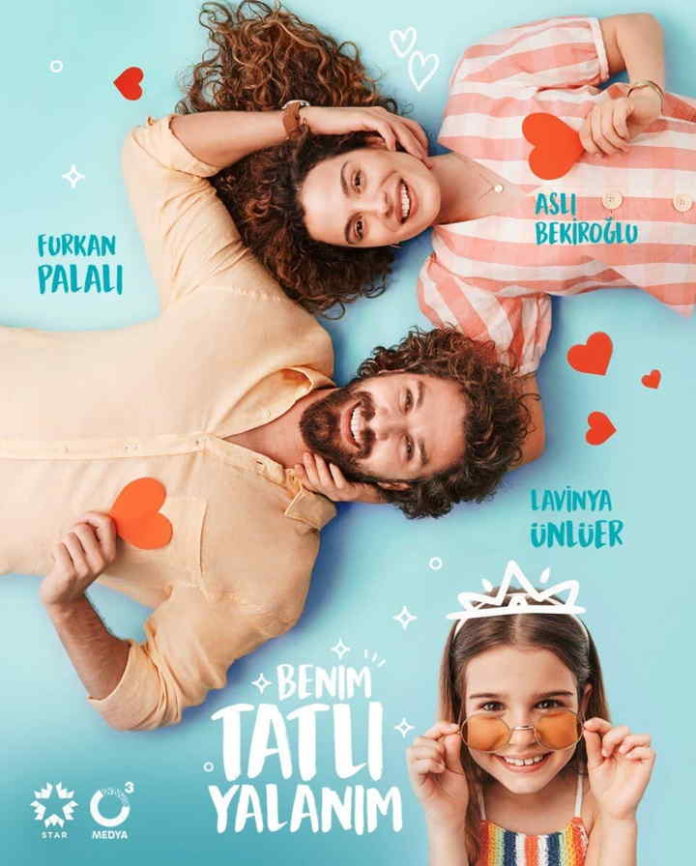 Benim Tatli Yalanim (English title: My Sweet Lie) is a comedy and drama Turkish production by O3 Medya, the first part of which was published on June 13, 2019, with the regulation of Barış Erçetin and Cihan Vural, and co-written by Deniz Dargı, Murat Taşkent, Cenk Boğatur, and Cem Görgeç. television series.  It ended by making the final on December 28, 2019.

Nejat (Furkan Palali) is a successful businessman who is the CEO of a company designing eyeglasses. He has been raising his daughter by himself after his wife abandoned them years ago. In order not to upset his daughter, Nejat hides this fact and tells a white lie. He lies that his wife Aylin is working at Africa for humanitarian purposes and sends letters to her daughter for years.

Nejat tries to do his best not to upset his daughter. He even tries to find his ex-wife but he cannot reach her. No matter how hard he tries, he cannot find a solution but to explain all the truth to his little daughter.

Meanwhile, a young girl Suna (Asli Bekiroglu) saves money to open and renovate a coffeehouse that was the place where her father and dead mother first met. She aims to make a surprise for her father through reviving this special coffeehouse and cherishing the memory of her mother. However, she needs to postpone her dreams after learning that his father’s local coffeehouse is confiscated due to the debt of her brother. In order to save their family heirloom coffeehouse, they need to find 200 thousand TL immediately.

The lives of Nejat and Suna intersect out of pure coincidence. While searching for a local spot for his company’s photo-shoot, Nejat finds the coffeehouse of Suna’s father. When he looks for whether this place is an appropriate one for the photo-shoot, Suna misunderstands him and assumes that Nejat is one of the dispossessors. She dismisses him without asking the reason why he is taking photos.

After then, Suna learns that Nejat is not related with the dispossessors. She thinks that she can get some money to save the family heirloom coffeehouse if Nejat agrees to rent their coffeehouse for a photo-shoot. In order to apologize and persuade Nejat for the photo-shoot, Suna goes to Nejat’s company. However, she cannot find him at the company. With the help of her close friend Burcu (Seda Turkmen), Suna learns the home address of Nejat and goes there in order not to lose time.

When Suna arrives at Nejat’s house, she apologizes sincerely and gets the approval of Nejat for the photo-shoot. However, something unexpected happens and Suna falls into the pool. She does not have a choice but to wait until her clothes get dry. And, a sequence of events leads her to the road of no return.

When Kayra gets up and sees Suna at their house, she supposes that her mother Aylin has returned. She becomes so happy that both Suna and Nejat become speechless. Now, Suna and Nejat have two choices: they will either tell the truth or they will act as if they are a married couple.

My Sweet Lie (Benim Tatli Yalanim) tv series story is about a white lie that aims to make a little girl happy but eventually causes a complex relationship. Will Suna accept to behave as if she is the mother of Kayra? How will Nejat tell all the truth to his daughter? Will Suna and Nejat manage to act as if they are married? Will Suna manage to save his father’s coffeehouse?