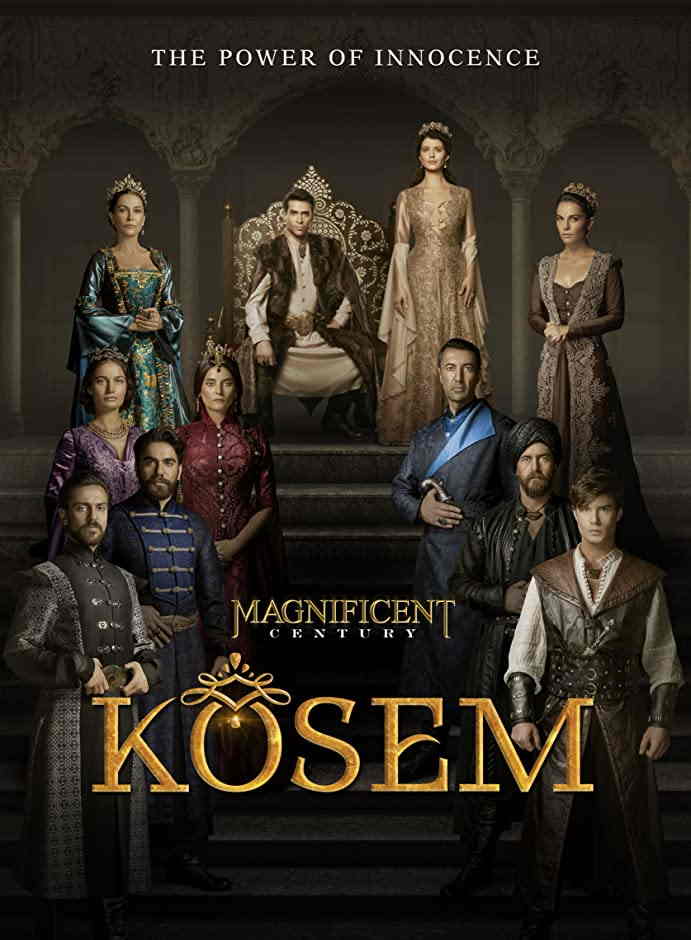 Muhteşem Yüzyıl: Kösem (English title: Magnificent Century Kösem) is a Turkish television sequel to the 2011 Turkish television period drama Muhteşem Yüzyıl. Written by Yılmaz Şahin, it recounts the life of Mahpeyker Kösem Sultan, a slave girl who became the most powerful woman in Ottoman history after she was captured and sent to the harem of Sultan Ahmed I. Actresses Nurgül Yeşilçay, Beren Saat, and Anastasia Tsilimpiou played the titular role in three different ages of her life, while actors Ekin Koç, Boran Kuzum, Taner Ölmez, Metin Akdülger, and Tugay Mercan were cast as different sultans of the Ottoman dynasty. Also in the starring cast were actresses Hülya Avşar, Tülin Özen, Leyla Feray, Farah Zeynep Abdullah, Aslıhan Gürbüz, and Hande Doğandemir, who played prominent roles of different sultanas in the series.

The first few episodes of the series were filmed in Chios, Greece. An excerpt of the show was screened in Cannes, France, at the annual international television festival MIPCOM about a month before its official premiere on Star TV on November 12, 2015. It was later transferred to FOX for its second season. Since its broadcast, Muhteşem Yüzyıl: Kösem has been aired in several countries.

Its final episode aired on 27 June 2017. The series’ finale marked the end of the six-year Muhteşem Yüzyıl saga.

Ahmed, son of Sultan Mehmed III and Handan Sultan, becomes the ruler of the Ottoman Empire after the execution of his older brother Mahmud, and the unexpected loss of his father, Sultan Mehmed III. When one day, his grandmother, the powerful Safiye Sultan, gives him a portrait of a young girl holding a lamb in her arms, he takes a liking to her, and she personally orders for the girl to be brought to Topkapi Palace. After being captured from her island home of Tinos, Greek-Venetian Anastasia, or Nasya, swears she will return to her homeland at all costs and enlists the help of Austrian janissary trainee Iskender en route to the palace. She meets Ahmed at a palace garden and is charmed by him, however, as he originally conceals his identity. Rising in favor, proud, vivacious, and stubborn Anastasia at the same time finds herself in the midst of blossoming palace intrigue between Safiye, Ahmed’s mother and new Valide Sultan, Handan Sultan and the late Sultan Mehmed’s other consort Halime Sultan, and suffers the jealousy of other concubines and violence.

Soon, Ahmed falls ill with smallpox. It is his aunt, Safiye’s daughter Fahriye Sultan who infects both him and his young brother -Halime’s younger son Mustafa who was spared execution in a break with custom- in her desperation not to be married off to Ahmed and Handan’s favorite Dervish Ağa and be with her love, Crimean prince Mehmed Giray, at the instigation of Mehmed’s ambitious brother Şahın. Riots take place when the locals discover what is happening. Hope emerges at the face of Ahmed’s concubine Rasha, who is found to be pregnant but Halime Sultan has the girl attacked by bandits while being sent to safety. Safiye, fearing the end of the three-century-old Ottoman dynasty, plots a new imperial order via Fahriye’s marriage to Mehmed Giray and the family’s escape from the palace.

Anastasia stubbornly remains at Ahmed’s bedside and ultimately faces the rebels and is shot, though the bullet lands on her Ta’wiz. She visits a sorceress, who gives her a cure to Ahmed’s pox. The price is that she will walk a road filled with blood, she will see all the people she loves die before her eyes. Everything turns normal and Anastasia’s name is then changed to Kösem, which means “sheep leading the herd”, indicating her future leadership and intelligence. She also converts to Islam. Safiye asks Kösem to convince Ahmed to let her remain in the palace, but Kösem refuses, saying that she should have stood by Ahmed when he needed them. This marks the beginning of Kösem and Safiye’s animosity.

Safiye blackmails Kösem with her father Enzo’s life into telling the Sultan about Handan’s attempt to kill little Mustafa and convincing him to keep her at court. Ahmed banishes his mother to the Old Palace. Safiye, however, does not keep her promise and kills Enzo. Kösem vows revenge. Fahriye does marry Dervish. Rasha renamed Mahfiruze, gives birth to a son named Osman.

Kösem learns about Fahriye’s crime through Safiye’s allegiant Cennet Hatun, whom she wins over, and blackmails Safiye into self-exile at the Old Palace. She also discovers that she is pregnant. Ahmed gifts Kösem the crown of Hürrem Sultan, showing his love and respect for her. Kösem exposes Fahriye who goes to the sanctuary. Handan returns to the palace and Kösem later bear a son named Mehmed, while Dervish becomes Grand Vizier. Kösem collaborates with Mehmed Giray, whose love Fahriye ultimately denounced, to capture her; Ahmed orders Dervish to discreetly poison her. Safiye, devastated, swears revenge and allies with Halime.

When Ahmed leaves for his military campaign against Safavid Persia, Safiye orders his assassination and with her loyalists, storms Topkapi Palace, wanting to enthrone Mustafa. Mahfiruze is killed, while Kösem narrowly escapes execution with the help of janissary officer Zülfikar and Safiye’s servant Bülbül Ağa. Ahmed arrives in time, having survived the murder thanks to Dervish Pasha. He incarcerates Safiye in the Maiden’s Tower and strips her off all her power and wealth. He decides to execute Mustafa to protect his crown, but regrets it and instead separates him from Halime and puts him in confinement. Kösem manages to adopt the orphaned Osman and begins developing a rivalry with Handan.

Hümaşah Sultan, Safiye’s eldest daughter, arrives from Egypt. Not long after, Kösem is told by Mehmed Giray about Dervish’s role in the assassination of Sultan Mehmed III. Halime meanwhile discovers the truth of Handan and Dervish’s feelings for one another. Dervish’s involvement in Sultan Mehmed III’s death is revealed to Ahmed, who kills Dervish himself. Handan soon commits suicide, in shame and fear that her secret has been told to her son. Hümaşah is given the leadership of the harem in her place, while Kösem gains the allegiance of the cunning chief harem eunuch Haci Ağa. During this time, Ahmed prepares to build a mosque opposite Hagia Sophia. Ahmed is blackmailed by Safiye into releasing her from prison and moving her to the Old Palace, to secure her aid in rescuing Kösem from bandits. Hümaşah resigns from her role, due to Kösem’s intrigues. Later, the former is informed by Bülbül that her long lost younger brother, is revealed to be Iskender.

Safiye and Hümaşah both conceal this truth for over eleven years, during which time Kösem consolidates her power and bears seven more children. Zülfikar and Hümaşah marry, and Iskender assumes the post of Hasodabaşı (chamberlain of the Sultan). Ahmed has also sired a son, Bayezid, on a third concubine, Gülbahar. Halime’s daughter Dilruba Sultan makes a secret marriage-alliance with Davud Pasha, and Ahmed is eventually convinced to allow the (formal) marriage.

On the occasion of Eid ul Fitr, Ahmed decides to release Mustafa, who unbeknownst to everyone has become mentally unstable over time. The Sultan Ahmed Mosque has been completed. Once again, Safiye attempts to assassinate Ahmed by poisoning him in order to clear the path for her own prince through a concubine. She succeeds and Ahmed, who is already suffering from serious stomach problems, is eventually told he has less than a fortnight to live. Kösem meanwhile has the girl killed, only to find out that she was her sister.

Hümaşah unwillingly informs Zülfikar about Iskender’s secret, and he, in turn, informs Kösem who, fearing for her children’s fate after her husband’s death, convinces Ahmed to order Iskender’s execution. With his disease progressing, Ahmed legally marries Kösem and soon dies. Kösem then aids Şehzade Mustafa in gaining the crown to establish a principle of seniority and prevent rivalries among her own sons, however, Halime, along with Dilruba turn against her; banishing her to the Old Palace. In the meantime, Iskender, having been spared by Zülfikar reunites with Safiye and they plot to seize power; he wants revenge from Kösem, whom he loved and supported faithfully since they met, for her cruelty.

Realizing her mistake, Kösem plans a coup d’état to dethrone Sultan Mustafa and replace him with Osman, using Mustafa’s weak mental state as justification. Halime, seeing Kösem’s sons as a threat, orders them executed, despite Kösem’s abduction of Dilruba, but with the unexpected help of Bülbül, Davud and Hümaşah, Kösem saves them and completes her coup, confining Mustafa again, and sending Halime to the Old Palace. Osman ascends to the throne as Osman II, but he refuses to end Kösem’s exile at the Old Palace, due to her role in Mustafa’s ascension and three years later orders the execution of her eldest son Mehmed, whom he has come to see, due to Safiye and his tutor’s scheming, as a threat to his throne.

Distraught, Kösem decides to dethrone Osman, while at the same time she repays Safiye by collaborating with Zülfikar to apparently kill Iskender and his claim with him. This drives Safiye to suicide; dying, she admits her defeat to Kösem and gifts her with Hürrem Sultan’s emerald ring. Eventually, Osman’s plans to replace the janissaries with a more loyal army prove to be the primary motive to his dethronement, masterminded by David and subsequent incarceration and strangulation. Also killed in the chaos are Zülfikar and at Dilruba’s instigation, Cennet Hatun. Thus begins Mustafa’s second reign. Hümaşah leaves the capital forever.

Kösem, having reconciled with Osman but failed to save him, is immensely anguished by his loss and decides to annihilate all her enemies. Thus, she orders her loyalists to murder Davud -already turned into a scapegoat for Osman’s death by Halime- as well as Dilruba and Halime, then imprison Mustafa again after viewing his psychologically disturbed condition not a threat to her rule. She then prepares to enthrone her eldest living son Murad and become herself the new and all-powerful Valide Sultan.