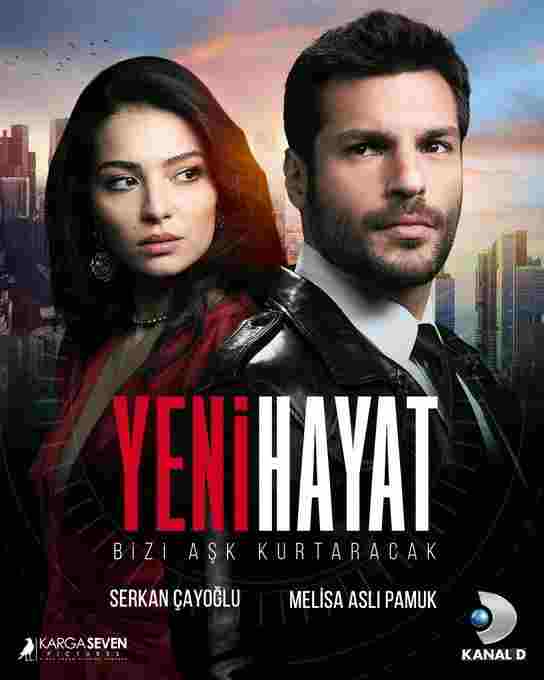 Yeni Hayat (English title: New Life) is a new Turkish Drama series, which is aired on KanalD. It features Serkan Çayoglu as Adem Sahin and Melisa Pamuk as Yasemin Karatan as lead roles.

It all starts with a business opportunity that confronts captain Adam (Serkan Çayoğlu), who’s separated from the special forces. The doors of a new life have been opened to the happy core family that Adam created with his wife Nevin (Nilperi Şahinkaya) and their young daughter Ece (Nisa Sofiya Aksongur). All Adam has to do is protect Jasmine (Melisa Aslı Pamuk), the young wife of Timur (Tayanç Ayaydın), a rich and powerful businessman. After all the dangerous operations he’s been involved in for Adam, an old maroon beret, it’s almost like a piece of cake. Nevin, on the other hand, is happy that they will finally be comfortable. With Adam accepting his job offer, he and his family enter a whole new world where they are strangers. Read Also Character Cast of Yeni Hayat (New Life)

Adam and Jasmine, people of different worlds clashing against grassroots opposite purposes, initially approach each other with hatred. The fact that this hatred turns into a big, passionate love would be a bad surprise for the two of them. It’s an impossible love. Coming together means breaking down a nest on the one hand, and pulling all the anger of a cruel and powerful man on the other. But love is a feeling that feeds on impossibilities. Adam and Jasmine, despite their best efforts, can’t stop succumbing to love. Adam’s wife, Nevin, has to discover how far she can go to protect her family, not lose her husband. While Adam and Yasemin’s exam is love, Nevin and Timur’s test is treason.

Serkan Çayoğlu (born 31 May 1987) is a Turkish German actor, known for his role in Kiraz Mevsimi and Halka.

Tayanç Ayaydın (born 7 August 1979) is a Turkish actor. Ayaydın was born in 1979 in Istanbul. He started his education at the Private Doğa College’s primary school.