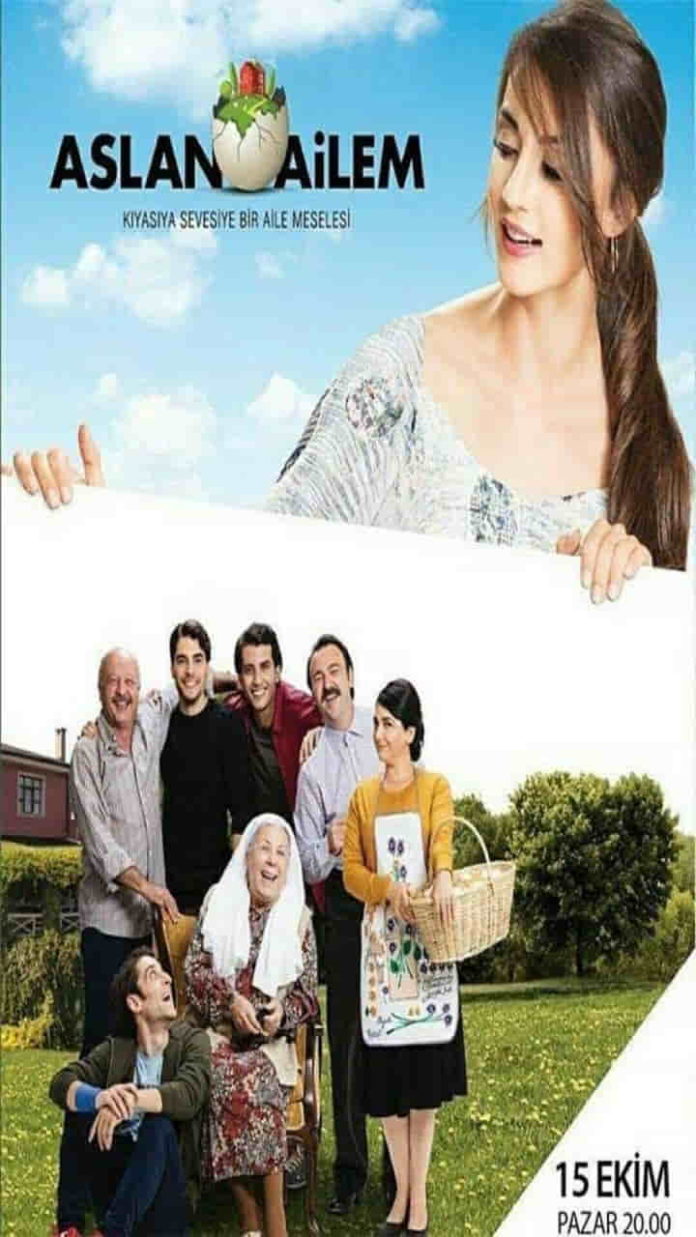 Aslan Ailem (English Title: My Lion Family) is a drama, comedy, and love Turkish television series directed by Başak Soysal and starring Burcu Özberk and Akın Akınözü. It started broadcasting on TRT 1 on October 22, 2017. The screenwriter of the series is Ayça Mutlugil. My Aslan Family is adapted from the TV series Ojakgyo Brothers, which was broadcast in Korea in 2011-2012. The series ended with the 31st episode released on May 20, 2018.

Lion Family is a family consisting of seven family members. Vedat (Hakan Salinmis) has been living together with his mother Hayriye (Zerrin Sumer), his wife Hatice (Benian Donmez), and his four sons in Lion Ranch for 30 years. Vedat is a farmer while his wife Hatice is a housewife who is also working on the Ranch by raising chickens and growing vegetables.

Lion Family lives happily all together in the Lion Ranch.

The eldest son Gayret (Ferdi Sancar) works as a radiologist who is a cleaning addict. Due to his picky personality, he cannot manage to have a girlfriend and all his dating attempts fail.

The second son Murat (Akin Akinozu) is a thirty years old young man who works as a police officer. He is extremely clever, handsome, and idealist. He makes observations and comes up with perfect analyses by paying attention to small details. Even though he seems to be so strong, he is in fact very tender. He cares about his family so much and becomes a trustworthy family member whom everybody asks for his opinion and advice.

The third son Umut (Firat Altunmese) works as a passionate journalist. He is devoted to his job and does not refrain from taking risks.

The fourth son Mutlu (Bora Akkas) is a carefree young man who spends most of his time at the ranch together with his parents and his grandmother. Even though he is so clever, he uses his intelligence for his own good.

Burcu is a beautiful university student who is the daughter of a wealthy man. She lives together with her father and her stepmother in a big mansion. She has everything in life and cares about her social media account. Her perfect luxury life and her daily concerns change dramatically when her father is accused of corruption. Due to these accusations, her father flees from the police and leaves the country without saying anything to his lovely daughter.

Burcu finds herself all alone after her father disappears. Her stepmother betrays her and leaves the house with her new boyfriend. All her family’s belongings are sent in the bailiffs, all bank accounts are suspended, and the house where she lives is taken control by the police.

Burcu finds herself in a desperate situation and does not know how to survive in this chaos. When she finds a letter left by her father, she learns that she owns the Lion Ranch.

Lion family (aslan ailem) tv series story is about Lion Family who finds itself in a difficult situation when the real owner of the ranch comes all of a sudden. Will Burcu manage to prove that she is the real owner of the Lion Ranch? Will Burcu manage to survive after her father flees from the police and leaves the country? Will Murat get along with Burcu?

Özberk, who graduated from the theater department of Hacettepe University State Conservatory, made her television debut in 2013 in the TV series Muhteşem Yüzyıl and played the character of Huricihan Sultan.

Fırat Altunmeşe (born 16 March 1990, Istanbul) is a Turkish actor. He is the son of İzzet Altınmeşe. His mother is a housewife, he has a brother and an older sister.

While he was studying at university, he dropped out of school in his second year. After then, he was interested in rap music and took acting lessons from Istanbul Craft. Firat Altunmese started his acting career with his role in the Turkish drama Conscience (Vicdan)

Süreyya Akın Akınözü (born 22 September 1990) is a Turkish actor known for playing Miran Aslanbey in the Turkish TV series Hercai. He is the son of the actress Özlem Akınözü.

Akın Akınözü was born on 22 September 1990, in Ankara, Turkey and is the only child of actress Özlem Akınözü and restaurant owner Tamer Akınözü. His maternal grandfather, Süreyya Arın was one of the first TV presenters on TRT (Turkish Radio and Television). His great-uncle Süha Arın is known as “The Father of Turkish Documentaries”.