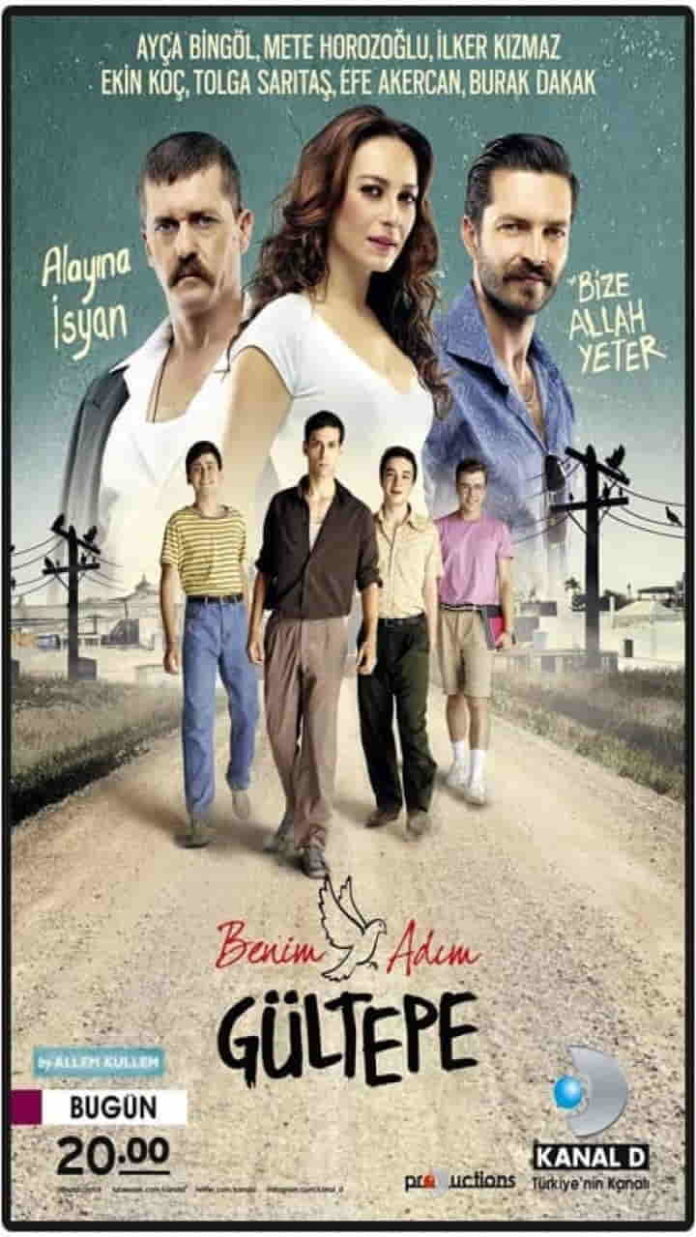 Benim Adım Gültepe (English Title: My Name Is Gültepe) is a television series produced by D Productions and broadcast on Kanal D. It was directed by Zeynep Günay Tan and Deniz Koloş and written by Vural Yaşaroğlu. Starring Mete Horozoğlu, Ayça Bingöl, and İlker Kızmaz, the series is about the lives of people living in a neighborhood in İzmir Gültepe, Konak in the 1980s. The series, which started on September 3, 2014, was canceled on November 3, 2014, on the grounds that it could not achieve the expected success in the ratings.

Gülümser; her husband smiles falling to prison, despite everything, to stand on your feet is trying to disown his son. However, the handsome, handsome minibus driver Halil with a forbidden and secret love can not escape from his life. Halil is also in love with Gülümser. She wants to build a life with him. Esref is a heavy-handed abis who is both feared and respected by the locals.

1980’s years. Gültepe District of Izmir. It is a district that Gültepe, every street is a different story, a different struggle for survival, heartbreaking disappointments, hopes quest, families clashing with each other, forbidden love and woven with unrequited love. There are all these stories and more, it Seyfi living in the neighborhood, Gülali, Fevzi and will be witnessed through the eyes of four best friends named Murat.

Gülümser is the mother of Gulali from these four children. Her husband smiles falling to prison, despite everything, to stand on your feet is trying to disown his son. But the district’s personable and Scamp minibus driver will not escape the ban and live a secret love affair with Halil. Halil is also in love with Gülümser. He wants to build a life with him. Esref is a heavy-handed abis who is both feared and respected by the locals.

One of the main heroes of “Benim Adim Gültepe”, which is to carry the struggles with the time, place, and life that the residents of the neighborhood live on to a different dille screen, is Gültepe himself

Ayça Bingöl (born 16 January 1975) is a Turkish actress born in Istanbul 1975, she graduated from the Theatre Department at the Istanbul University State Conservatory in 1998.

Bingöl graduated from Istanbul University State Conservatory in 1998 with a degree in theatre studies. In 1996, she began working at Dormen Theatre as a professional actress, and between 1998 and 2000 she made guest appearances on the stage of Tiyatro Fora. Bingöl continued her career by taking part in commercials, TV series, as well as voice acting. She later joined the theatre organization Yeditepe Oyuncuları.

Ekin Koç had his first and main role in the fantasy TV series Sana Bir Sır Vereceğim (I will give you a secret) in which he played a young man with invisibility power called Tilki – Kıvanç Gündoğdu. This role was his big breakthrough with his first partner Demet Özdemir.

Tolga Sarıtaş (born 30 May 1991) is a Turkish actor. He is known for his roles as Şehzade Cihangir in Muhteşem Yüzyıl, Ali Mertoğlu in Güneşin Kızları, ”Büyük Sürgün Kafkasya” mini historical series about Meskhetian Turks and Yavuz Karasu in the successful drama Söz.

Mete Horozoğlu (born 11 October 1975) is a Turkish actor. Mete Horozoğlu was born in Ankara. His family was immigrants from Sarajevo who settled in Bursa.

He spent his primary and secondary school years in Ankara and Yalova respectively and later moved to Karamürsel to enroll in high school. In 2001, he graduated from Anadolu University State Conservatory with a degree in theatre studies. In 2010, he got his master’s degree in advanced acting from Bahçeşehir University.