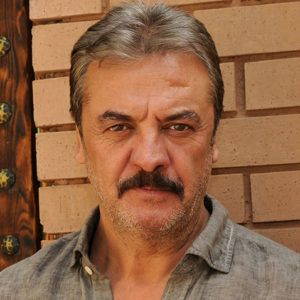 Mesut Akusta (born 22 February 1964) is a Turkish actor. Akusta was born in Konya. He finished elementary school there. Upon his father’s retirement, the family moved to Ayton and in 1976 he started secondary school. After his father’s death, he moved with his family to Ankara in 1985. After passing the university entrance exam won a place in the school of literature and arts. He started his career by appearing in plays for children. In 1992, he joined the cast of Yeditepe Hadi Çaman Theatre. In 1997, he appeared in an adaptation of Nezihe Araz’s play Cowhide. He also appeared in a number of musicals, including Fehim Paşa Konağı, Atları da Vurdular and Şerefe Yirminci Yüzyıl.

Akusta made his cinematic debut with Yanlış Saksının Çiçeği. He also pursued a career on television, most notably appearing in a leading role on the 2013 drama series Karagül. He continued his career by taking part in the movies Herşey Çok Güzel Olacak, Eylül Fırtınası, and Filler ve Çimen before appearing in the 2019 drama movie 7. Koğuştaki Mucize, which was critically praised.

Mesut Akusta was born in 22 February 1964 in Konya, Sarayonu, Gozlu. He went to primary school there. After his father was retired, they moved to Afyon in 1976 and Mesut Akusta went to secondary school in Afyon. When his father died in 1985, Mesut Akusta went to Ankara and attended trainings at public training centers. He took technical painting classes and theatre classes. Mesut Akusta took part in children theatre plays during 1986 and 1992. He joined to theatre group named Hadi Caman Yedi Tepe Oyunculari in Istanbul in 1992.Mesut Akusta started his acting career on tv with his role in Turkish series Sen Olasin Nuri Bey. While his tv career, Mesut Akusta also continued to take part in various theatre plays and musicals such as Cahide by Nezihe Araz (1997); Fehim Pasa Konagi; Atlari da Vurdular; Serefe Yirmibirinci Yuzyil.