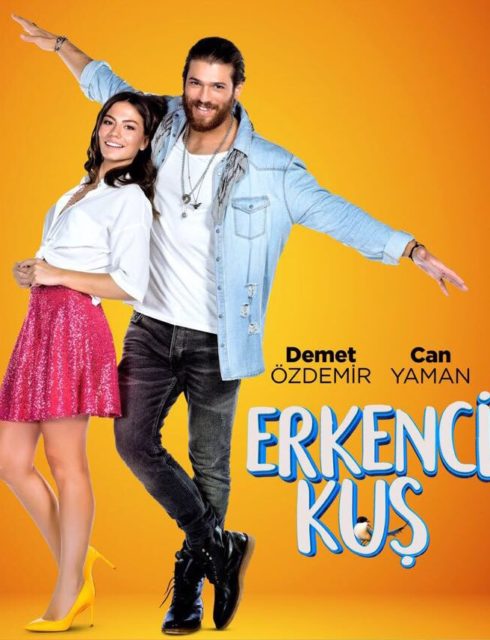 Erkenci Kus (English: Early Bird) is a Turkish drama series broadcast on Star TV. The show premiered in June 2018. It stars Demet Ozdemir as Sanem Soysal and Can Yaman as Can Divit.

Sanem’s father, Nihat, has a grocery store. Sanem is a young, natural, cheerful, and vital young girl who, unlike her older sister, Lale, opens her bacon instead of her father, who has been breathless every morning since she was young.

Sanem, when the women’s magazine that her sister works for works in the Countess, she will make a job application and the quest will begin after that. Array Sanem will be a girl between two brothers. In the early bird series, Birand Tunca and Can Yaman will fall in love with Sanem. Sanem, who left Can Yaman, will fall in love with the character of his brother Birand Tunca.

Demet Özdemir was born in Kocaeli on February 26, 1992. After completing his high school education at Evening High School, he took a dance theatre course from Shahika Tekand. Demet Özdemir is 1.70 cm tall.

She first began her career as one of the dancer daughters of the voice artist Bengü. She attracted attention with her flexible movements and soon managed to become one of ephesus girls. In 2009, she appeared as a dancer in singer Mustafa Sandal’s “Ateş Et”.

Sanem is a dreamer, intelligent, and madly. Her biggest dream is to be a writer and settle in the Galapagos. She’s a deft in trouble. She usually acts twice without thinking.

Can Yaman as Can Divit

Can Yaman was born in Istanbul in 1989. Originally from Yugoslav descent, Yaman attended bilfen College, primary and secondary school, and high school at Italian High School. Can Yaman, whose school life is full of achievements, finished high school with first place. Yaman went to America within the scope of the student exchange program and graduated from Yeditepe University Law Department in 2012.

Can, who worked as a lawyer for 6 months and speaks two languages, took acting classes as a hobby. He played the character of Badr in his first series, Gönül İşleri (Heart Affairs). Sinem Kobal’s tidal love with Sevda brought to life attracted attention. The young actress expanded her fan base with her role as Aras in her second series, ‘İnadına Aşk (Love in Spite)’.

Sanem’s sister. It’s the pupil of the Position, and it’s a source of pride for the family. A determined, ambitious young woman. Her biggest dream is to be a successful businesswoman.

Sanem and Leyla’s mother… She’s one of the crazy women in the neighborhood. She’s a good mother, but she’s making a distinction between her daughters, unwittingly. She thinks her eldest daughter, Leyla, can do what she can’t do.

Sanem and Leyla’s father. 40 years of grocery store. He’s not ambitious, he’s been roasted in his own oil for the rest of his life. A loving, honest, calm man who doesn’t compromise on his principles.

Emre’s secret lover. A well-groomed, sex-high woman. He’s very ambitious about work, if necessary, it burns the world, even his love…

He’s already in love with Sanem. Zebercet is an emotional but expressed emotion in strange ways. They live on the rent of your grandfather and father’s property. He’s very fond of his mother Aysun.

The most colorful of the agency… She’s an intern. His real name is Genghis, but everyone calls him Ceycey. He has a very good aesthetic taste that hasn’t been discovered, he can’t stand the recourse. He knows where everything is best, where to beat, nor drink. Sharp-tongued.

Secretary at the agency. He knows everything that happens in the company, and even though he likes gossip, he’s so good at his job that he’s an indispensable member of the agency. She’s an aggressive, curious, funny, cheerful girl who’s plucking her grip.

Sanem’s best friend… She’s crazy, she’s in a mess, but she’s a sweet girl. Open-minded, innovative, cheerful… Ayhan is always looking for new projects, and if he decides to be busy for a week, he may start designing applications the next week without knowing it.

Can’s very close friend from Galatasaray High School. Metin’s family isn’t doing well. He went to college on a scholarship. He came to his position today with his own effort and will. He’s a smart, decent man. He’s got a lot of business ambition. Fikr-i Harika’s corporate lawyer. He likes Deren, but he hasn’t even had a dialogue with Deren all these years. It’s a little unfortunate about love.

English Subtitles
Various Websites are Translating this series in english subtitles. Below are the links of the site.
ALACom | TurkishFam | Osnsub | Love Series | Kinemania