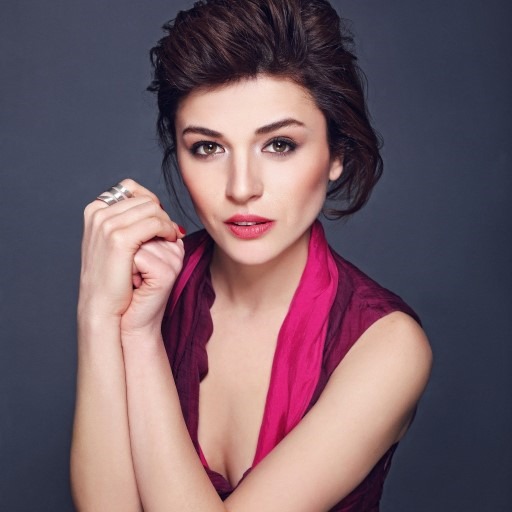 Nazlı Gonca Vuslateri (born 2 September 1986) is a Turkish actress, columnist, screenwriter, poet, radio host, and acting trainer. She has an older sister, musician Aslı Vuslateri and a stepbrother, Cem Vuslateri. She is of Circassian, Abkhazian, Georgian, and Arab descent.

She was born in Bursa on 2 September 1986. Since the age of nine, Gonca Vuslateri has studied acting (including kids theatre, Eric Morris, Susana Morris, Enis Fosforoğlu). She graduated from the Theater Department of Müjdat Gezen Art Center. Gonca Vuslateri, who also worked at the “Dot” theatre. With a remarkable sense of psychology and humor, she forcefully performed a wide range of characters in various genres, including comedy, and drama.

She played two different characters in the comedy series Yalan Dünya simultaneously and won Golden Butterfly Awards for Best Comedy Actress. The Best Actress of the year was chosen for her role “Şule” in the series Anne by the Hürriyet jury. She played in “Küçük Sırlar” a Turkish remake of Gossip Girl. She played “Masha” by Anton Chekhov in the play Martı (The Seagull). During her theatre career, she won two Afife Jale Play Awards and Sadri Alışık Award. She published “Manik Serçe” her poetry book. She wrote “Kırmızı Başlıklı Kız Uzayda” kids theater. She sometimes gives an acting lesson.

She continues to writing in “Giriş Katın Bir Altı” of Hürriyet newspaper and to presenting “Giriş Katın Bir Altı” radio programme in NTV radio. Due to her 75 years old Vasfiye character in Yalan Dünya, the right shoulder of Gonca Vuslateri collapsed, her vocal cords were seriously damaged and her mandible ached. She regularly goes to a physiotherapist, and sound therapist. During an interview, she stated that her mother decided she and her older sister were going to be artists.

But economic troubles forced them too hard. Her father was a petty officer and many of her family work in the army. Gaffar Okkan, the chief constable of Diyarbakır who was assassinated in an ambush is a cousin of her grandfather.