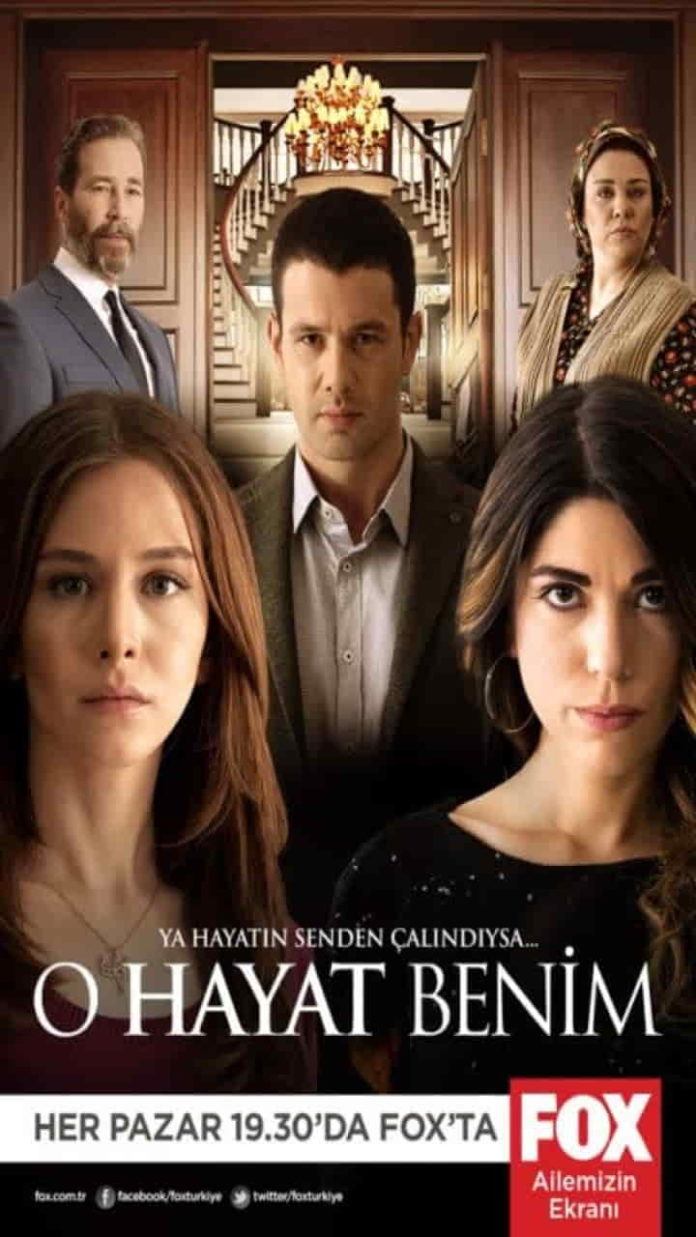 O Hayat Benim (English Title: That’s My Life) is a Turkish television drama series, originally broadcast on FOX from 2014 to 2017.

Bahar is a young girl who lives in Istanbul with her mother Nuran, her father Ilyas, and her sister Efsun. Due to her family’s bad financial situation, Bahar must drop out of school and work in a pastry shop to earn money. She is a kind, optimistic and valuable girl, unlike her sister.

Bahar is actually adopted. She is the daughter of Mehmet Emir Atahan, a rich and successful businessman. It is a secret for many people, and for Bahar.

Yusuf gave Bahar to Ilyas, an honorable worker of his, whom he asked to raise Bahar as if she were his own daughter. Years later, when Yusuf learned that he was dying, his last wish was to see his granddaughter. After many years, Yusuf visits Mehmet Emir and tells him he has a daughter.

Bahar’s adoptive parents Nuran and Ilyas do not tell her the truth about who she is, and when the Atahan family comes in search of Bahar, Nuran and Ilyas send their other daughter Efsun in place of Bahar. Efsun then begins to live the life that belongs to Bahar. Yusuf is accidentally killed. Nuran and Ilyas, who are prompted by Nuran to become involved in the murder, interred the corpse in their backyard, without anyone noticing.

The duo then lives in Mehmet’s palace through Efsun’s support. Nuran is scornful toward the family and Ilyas feels remorse because of the event, for not telling the truth in time, but Nuran threatened him. An evil Nuran schemes against Bahar and her lover Ateş, taking Ateş to Efsun, falsely impregnating her. On the day of Efsun and Ateş’s wedding, Ateş proves that he did not impregnate Efsun and reveals the machination of Nuran to the whole family. Mehmet furiously expels them from the palace. The series then makes the initial climax when Ilyas demands Nuran to divorce. Nuran becomes anxious and unreasonable in the season. Nuran is killed in a bus accident. After her death, Ilyas becomes reckless and sadistic, while Efsun blames him.

News of the machinations of Nuran and an innocent Elias surge. As time passes and harmony sets in for the characters, Bahar marries Ateş, and Efsun marries Arda, the son of her enemy, and Mehmet’s sister, Hülya. The two sisters come to an agreement and live happy life. While Efsun is pregnant by Arda, Bahar is pregnant by Ateş. Another hostile party, Kenan, infiltrates Mehmet’s family using Hülya as his love interest, then marries her. He is the serial killer who killed Ateş’s parents when he was a child, so Ateş seeks revenge. When Kenan is about to kill Ateş, Bahar shoots and wounds him.

Bahar is unknown to officials and is a fugitive. While Efsun tries to escape her, Bahar inadvertently pushes Efsun in front of an oncoming car, killing her fetus. Efsun seeks revenge on Bahar. The first season ends when Bahar gives birth and Efsun steals the baby from the intensive care nursery, and a man, presumably dispatched by Kenan, splits the chemical on Bahar’s face.