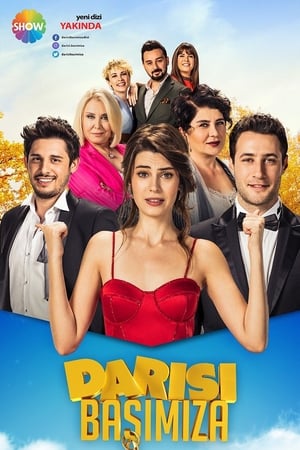 Darisi Basimiza (English: The Wedding Planner) is a Turkish drama series broadcast on Show TV. The show premiered on 4 July 2018. It stars Elif Dogan as Oyku and Ozan Dolunay as Ozan.

The only anticipation of Zerrin (Devrim Yakut), a self-sacrificing mother who devoted her life to her children, is to see their children build happy nests. But what is possible! The older daughter Rüya (Açelya Topaloğlu), a platonic lover of an old player, has not seen her head up and look at her tales around her. Little boy Serkan (Burak Can) is the mother of his mother, it is obvious that he will not easily leave home. Medieval daughter Öykü (Elif Doğan) is in abroad, in her work, in her career …

While Zerrin is not expecting to see his children’s children in the near future, his world will become his own by giving news that his story will be married. Waiting for the day to meet their dreams with all four eyes, Zerrin is expecting a bad surprise on the day of asking for the girl. Aksoy and Arslansoy are facing families and old books are opening up. Not only Zerrin, but also Oyku and Ruya are getting what they are before this encounter. When you get into each other, you are left with a grip of love, a sip of happiness and plenty of laughter.

Elif Doğan was born in Istanbul in 1995. She completed her education at the Musical Department of the State Conservatory of Istanbul University.

As she enrolled in university, through her mother’s support she participated in different plays as an actress. Between 2008–2009, she got musical education at MSM-Actor Studio and graduated from MSM-Conservatory with a degree in theatre studies in 2013.

İbrahim Kendirci (born 9 September 1986, Gaziantep) is a Turkish actor. His mother, Hasibe Kendirci, and his father, Salih Kendirci. He has an older sister named Zeynep. Contractors father Abraham than six months, studio apartments, whether tourists were moved to Antalya took the children with the idea of selling high school education in Antalya ‘also saw Kendirci, training the Istanbul University State Conservatory ‘ in has been completed.

Burak Can as Serkan

English Subtitles
Various Websites are Translating this series in English subtitles. Below are the links to the site.
ALAinHindi | Osnsub | Love Series | Kinemania