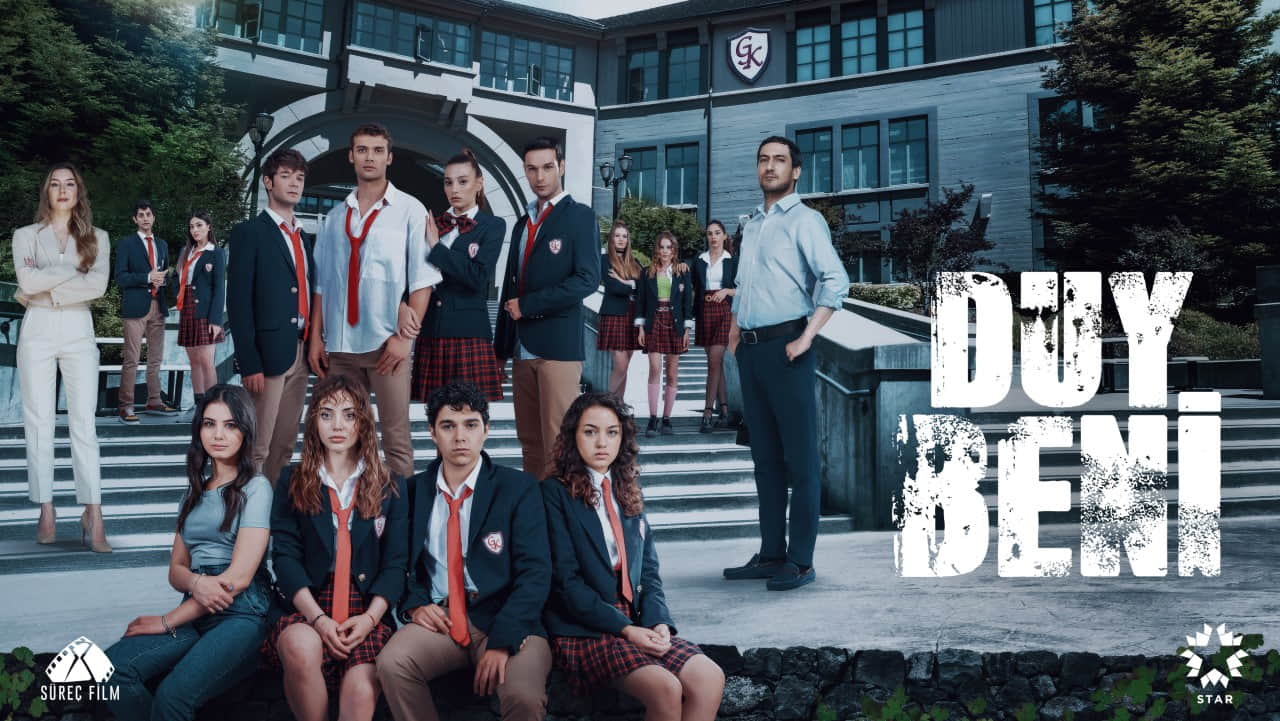 Duy Beni is produced by Süreç Film a Turkish television series directed by Ali Balcı and written by Makbule Kosif. It is broadcasted on Star TV in Turkey. Caner Topçu, Rabia Soytürk, and Berk Hakman plays the lead roles.

Leyla is a close friend of Ekim, a lively girl. One morning, while Leyla was going to school, she was hit by a car and became disabled. Before the accident, Kanat and Leyla had a relationship.

Kanat is the son of a wealthy family. He is not on good terms with his family. He is one of the school’s leading and popular boys. He used to have a relationship with Melisa. However, Kanat broke up with Melisa because he was bored with this relationship. In any case, Kanat never wore this relationship. All the girls at school are in love with Kanat. Let’s see, Kanat will fall in love, and he will fall in love with Ekim, who comes to school with a scholarship.

While Ekim lives in a middle-class neighborhood, her close friend Leyla is hit by a car on her way to school in the morning. Ekim sees that the hit car entered a nearby private high school and was lost track of, but can’t prove it. Ekim works for the 3-person scholarship quota opened in this special mind and enters that school with a scholarship. The only goal of Ekim is to find out who did this to her friend Leyla.

In “Duy Beni”, Melisa is the daughter of the owner of the school. She is an ambitious girl chasing her dreams. Melisa is an active girl on social media. All students admire Melisa. Melisa to Kanat. Although she does not want Kanat, Melisa forcibly wants to continue her old relationships with Kanat. Melisa is the queen of the school. Melisa has a rabble of girls at school. Melisa thinks that Kanat will forgive her and they will continue their relationship, but Kanat has no feelings for Melisa.

Hazal is a beautiful girl who skipped school. She is a smart girl who sees that school is hell, not heaven. She has problems that she cannot solve within herself. She is usually at the cafe and doesn’t come to school very often. Hazal is not like other girls, she is a mature girl who is far from ostentatious. She doesn’t have many friends. She realizes that Melisa is dangerous, but instead of resisting Melisa, she stays away from her. Hazal likes swimming more.

He is the twin brother of Aziz Kanat. Kanat and Aziz have been studying in the same class for years. Although Kanat manages to stand upright without succumbing to his father’s pressure, his twin Aziz is not as strong as him. He is very afraid of his father and very shy.

Bekir was one of the students who got the right to study for free at Gerçek College. Bekir is a smart, hardworking young man, although he is a bit of a pretty girl-lover. He is the brother of Bekir Halil.

Jasmine Berkiş Duy Beni will be in the cast with the character of Naz. Naz will suffer from Melisa’s psychological and physical violence and will consider leaving school.

Dağhan is one of the smart children who came to school with a scholarship last year in the series Duy Beni. Even though he is bullied by Kanat and the other children in the class, he can never speak up. He tries to impose himself on the class by keeping quiet.

Ayşe is one of the girls who got a scholarship to study at college. Ayşe and Ekim are close friends. Ayşe will be bullied a lot at school because she is a relatively quiet and hardworking girl. She is the daughter of Ayşe Sedat.

Ceyda is one of the students of the college. She is Melisa’s, right-hand man. Bekir is in love with Ceyda, but Ceyda does not look at Bekir’s face much.

Ege Kökenli will give life to a successful and sensitive counselor named Bahar in the series Duy Beni. She will fall in love with Selim.

Selim is a handsome and fearless literature teacher who is new to the school. Ziya, who was killed after hitting Leyla, came to school instead of Ziya. Selim started as a literature teacher. At a young age, Selim’s teacher lost both his mother and father, so he is a lonely character.

He is the principal of Gerçek College in the series. Loving money, He is a greedy man who will do anything for money.

Ozan Gerçek is one of the most dangerous students in his college. He doesn’t like scholarship students at all and thinks they shouldn’t be in school. As soon as Ozan arrives, he likes Ekim and constantly sexually harasses her. The bard is a fearless type, only afraid of the queen.

1. What is the series Duy Beni is all about?

Duy Beni is a Turkish series created by Ali Balci.

2. When did the series Duy Reni release?

It originally released in Turkey on July 7, 2022 and was aired on Star TV.

3. Who are the main cast in the series Duy Beni?

4. What is the English title for the series Duy Beni?

The English title for this Turkish drama is “Hear Me”.

5. What is the theme of the series Duy Beni?

The series will tell the tale of a sad incident that happened to a high school kid named October.