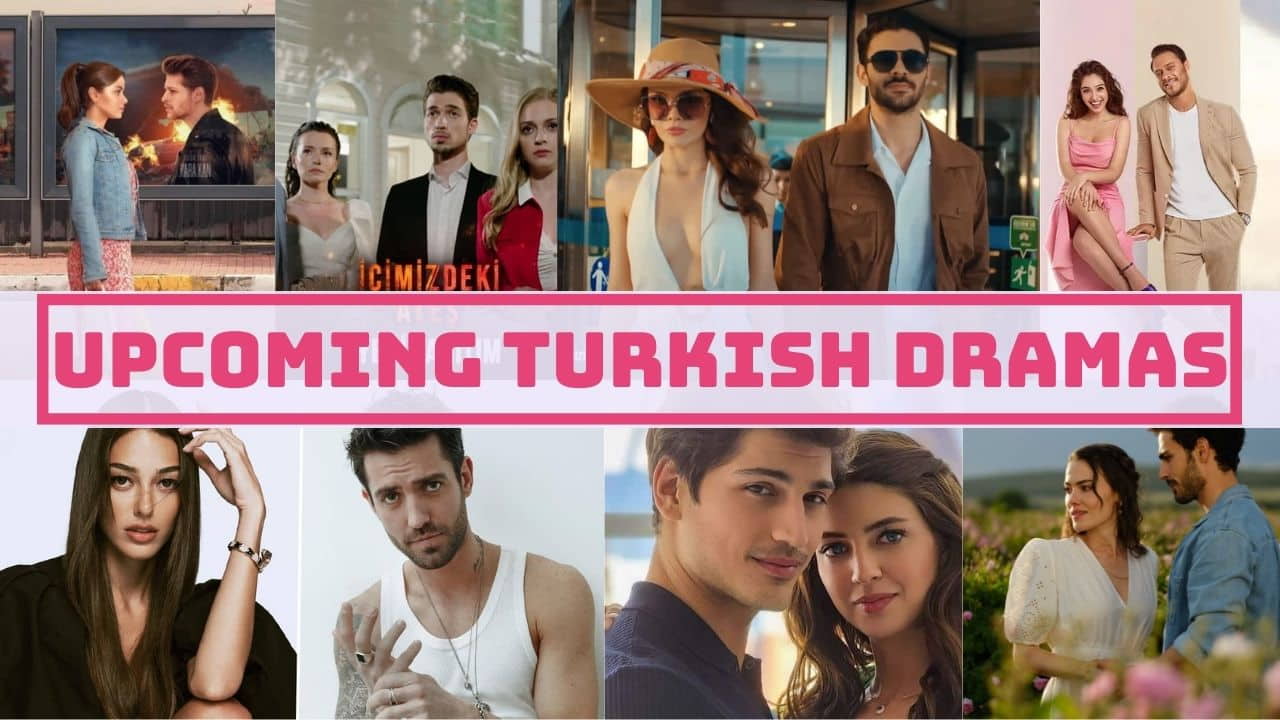 The popularity of Turkish drama is unstoppable. Moreover, the number of followers of the Turkish series is growing year by year. Though despite the huge number of annual TV series in turkey only one-third make it until the end of a season or, maybe even less.

On the other hand, there are plenty of websites where you can watch web series, Tv-Shows, and movies online for free with high-quality content and also with no Geological restrictions.

So, here in this article, we will list the TOP 46 Upcoming Turkish Dramas and New Turkish Dramas that you would definitely love to watch with your friends, family, or yourself.

(Note: This list is updated weekly according to ratings)

Ferit, the son of a wealthy family, is famous for his debauchery. His grandfather Halis Aga, therefore, took a decision when the police raided his house and decided to take the daughter of a family they are close to from his hometown Gaziantep as a bride for his grandson.

Coming from a deep-rooted and powerful family, the Algerian Turk takes revenge for his brother, who worked for his state and fell victim to sabotage. He starts a new life by showing that he died for the sake of the state and the safety of his family. Algeria Turk meets Firuze, one of the doctors who knows no borders as a result of an injury during the ongoing operations abroad. Although he misses his wife and family, he knows that he will never return to them.

Algeria, who fell in love with Firuze and started a family again, is deciphered after a while and has to return to life, in Istanbul. However, neither his new family nor his family, who have missed him for years and prayed at his grave, are aware of these developments. Istanbul, which he left behind by entrusting him, will appear before him as a completely different Istanbul.

The series is the story of Elif, who has to start all over again by breaking all the rules, coming out of the dark to the light of day. Elif’s life, which has been living in a lie for 10 years, turns upside down with news. Everything gets more complicated when the path of the helpless young woman unexpectedly crosses with the wealthy businessman Fırat.

Erkan Petekkaya, who has won critical recognition in every project he took part in, is going to portray a surprising character. He is going to act as a 45-year-old man, Kadir, in O Kız. Even if he’s forty-five years old, he perceives life as if he’s five. Regardless of the bitterness of life, the endless love he has inside of him will embrace everyone around him.

In the Zengin Kız series, Zeynep is a beautiful girl who cannot get an education because of financial difficulties and has to babysit. Zeynep’s father is an alcoholic man who is addicted to horse racing. Zeynep, who found a lot of money on her birthday, will give a big test in her rich life.

Darmaduman is a Turkish adaptation of Beverly Hills 90210.

In the Kusursuz Kiracı, the main character Mona is a young woman who grew up in an orphanage. She works for the internet newspaper and has been reporting on house arson cases in different parts of Istanbul recently.

Another day when she goes to the news of the fire, they come across the photo reporter Yakup, who came to do the same news. Although they secretly like each other, they bicker because they have completely opposite characters. Returning from the news, Mona sees that the owner of the house, with whom she is already in a fight, has put her belongings in front of the door and is now homeless.

Leyla, her friend from the orphanage and now a police officer is on a secret mission, she is forced to accept as a temporary solution the offer of Jacob, whom she has just met, to become a tenant in his house, which was later divided into two by a strange architecture.

However, on the first day that Mona moves into the apartment, she realizes that strange things are going on in the Yuva Apartment. The neighbors, who act mysteriously, do not seem happy at all that she has moved into the apartment. It’s clear that something extraordinary is going on inside, but before Mona has time to understand what’s going on, she runs into an unexpected, serious problem.

As I’m sure you’re bored of looking for New Turkish Dramas and are excited to know what will be going to come in the future? So, below we’ve mentioned some of the best most-watched, and upcoming web series that you would love to watch.

(Note: This list is updated weekly according to ratings)

Leaving his dirty past behind, Sadi Payasli, who is appointed as a geography teacher at Karabayir High School, crosses the path with five young people from the reformatory.

The happy life of Ali and his friends on their own, changes overnight. They have nothing but a long night of secrets and doubts. When they believe that justice will not come to them, a miracle happens. A miracle offered to them from the source of doubt. In fact, nothing is as it seems. They fearlessly set off on their new life to find the truth. When their courage is added to their strength, they will only have to open the doors of that secret night one by one. Finding the keys will not be easy.

The drama is about a fascinating family and youth drama and will highlight the phenomenon of “bullying” among bright teenagers at a prestigious school.

It tells the story of Gonca, who encounters the mysterious secrets of the past thanks to the inheritance left to her after her mother’s death, and Toprak, the son of the Atabey family, one of the leading families of Isparta.

Seversin – You Love It (Ended)

Seversin tells the story of Tolga who is a young actor at the peak of his fame but unsatisfied, while Asya is a clerk working in a shopping mall who dreams of studying at university. When the paths of these two young people, who see life as different as black and white, cross as a result of coincidences, two different worlds collide with each other. While Asya suddenly finds herself in a life that she is not interested in, Tolga, the lover of young girls, will pay the price for underestimating Asya.

“Balkan Ninnisi” tells the story of the struggle of two young people from different nationalities to achieve the impossible for the sake of their love in Skopje, which remained an Ottoman city for 600 years and where Turks and Albanians lived on one side and Macedonians on the other.

Mükemmel Eşleşme tells the stories of a big crowded family and warm people, about two young people who met with the help of their mothers and how they started a happy family.

The series, directed by Şenol Sönmez and written by Burcu Yılmaz and Pınar Kaya, will portray the love of the intelligent, resourceful and beautiful Zeynep, who manages the family business, and Civan Mert, a naive but brave neighborhood boy who is famous as the “one-finger valet”.

Their middle son Murat is a gambling addict who bets everything in life while he needs to study law. Their young son Omar, who they think is studying engineering, has become a musician working in bars. Their eldest son, Ferit, left medical school half-unaware of his family and turned into an incorrigible philanderer with his father’s money.

Ferit, who dreams of marrying flirtatious, beautiful and young girls who have been women all his life, has fun like a spoiled child in the face of girls’ attention and is never content with one person. He loved three different girls in different lanes, and he handled them all skillfully. Until he met Zehra.

The moment Burçak, Nihal, and Sera realize that they have been Decoyed, they get together and form a revenge plan. Just as Ferit broke their hearts, they will also break Ferit’s heart.

The architect of this plan is Zehra, who lives with her mother Perihan, older brother Ali, cousin Huriye and nephew Duygu. Zehra, who does not trust men, advises young women to take revenge on the man who did this to them instead of eating each other.

But there’s something she doesn’t know. Zehra will be the main role in the revenge that will be taken from the flirtatious Ferit.

In “Gizli Saklı”, where love, adventure, crime, and comedy come together, it will lock the audience on the screen; Naz has just graduated from the police academy and lives with her mother and uncle, who are protective characters. The police force, after a mafia boss named Tarık Kosuoglu, decides to use Naz and the insane police officer Pamir together on a secret mission. Like a newly married couple, Pamir and Naz will move across the mafia family’s house and gain Tarık Kosuoglu’s trust and bring him to justice.

Firuze is a contemporary Cinderella. She is a smart and determined young woman who is both studying and working. After a difficult childhood, she lives a quiet life with her siblings and their adopted Muhsin Baba. Until she met Kagan.

A naive love story that looks like the initials of her name embroidered on a cloth handkerchief turns into a whirlwind that engulfs all her loved ones. She begins to drift away from her sheltered world, surrounded by the men of her family who love and watch over her, towards the dark universe of Kagan.

The story of four strong, intelligent, ambitious, and successful young people who took their first steps in the business world to hold on to life and reach their dreams…

Mert, Bahar, Hale, and Ege, young lawyer candidates who graduated from the faculty of law, pass through difficult eliminations and start their internship with Famous Lawyer Doğan Yener and his wife Tülin Tan. They must stay out of trouble during the internship. While life tests them with all kinds of obstacles on this journey, we will see together the adventures of reaching their goals with the guidance of Doğan and Tülin and what they will gain and give up on this path…

So what are you waiting for? Go and watch the dramas, most of the dramas will be available on youtube and if any drama is not available you can watch it here. If you really liked the article do share your thoughts in our comment section down below.